GLOSSARY
Small Arcs of Larger Circles
Framing through other patterns
​​ 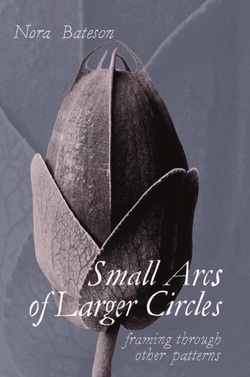 Click image to return to the book's home page
A glossary of new and contentious terms discussed in the book
Agency
Agency refers to the capacity to act independently or freely. Like liberty and progress, it is cherished in the west.
But the notion of the individual (or individual entity) having agency is confused by a paradox. The confusion lies with the idea of individuation. The entity (organism, person, or organization) can only act freely and independently if we assert the belief that the individual (or individual entity) is free and independent.
On closer inspection, it’s obvious that there is no aspect of that entity that is uninfluenced, uninformed, or unbound to the wider context and to wider contextual interactions. So, agency is diffused into the larger contextual processes that are shared by the entire community. Agency, it turns out, is a product of mutual learning within and between people, nature, and culture—and not at all a capacity of the individual.

Art and Science
Art allows us to perceive from multiple perspectives simultaneously. In order for science to really work with complexity we need art to help inform science about forming an approach to perceiving.


Identity and Singularity
The ultimate act of love is to allow ourselves and others to be complex—trying never to pin down, sum up, pigeon-hole, label, or otherwise reduce ourselves or any other living system to a singular tag.
Each of us is a horizon of always re-shaping forms, falling in and out of the puzzle of our own cohesion. We are all as fragmented as a Picasso. And we are also as whole as life.
We each have one name, one pair of eyes, but each of us is more than one identity—more than twenty identities. More than we can count.
We don’t lose one part of us when we accept the other parts. We can be both local and global, individual and communal. We are like one another in that we are complex, though the stories of our lives may be in sharp contrast. Singularity of identity no longer serves us.


Interdependency
When we look through the lens of interdependency, it is impossible to separate individuals from their contexts of influence and experience. This blurs the ‘hero’s story.’ Leadership, then, can better be attributed to the town or village that nourished a person than to that person’s individual qualities.
In ecological terms we can attribute the health and vitality of the whale to the ocean not only to the whale, and we can attribute the strength of the lion to the jungle (or savannah) not only to the lion. The environment in which the alchemy of collective need is met with a corresponding alchemical combination of possibility produces new paths to follow.
[Here we learn the same lesson as we do in exploring the idea of Agency.]

Leadership
The very word ‘leadership’ has become cringe worthy. It reeks of colonialism and lopsided history-book listings of individuals successful in taking, making, and claiming. Celebrating the potency of the individual is an insatiable ghost haunting the endless array of courses and manuals for developing leaders. Our fatal flaw may be the idea that an individual or institution can single-handedly penetrate new frontiers of possibility. This is an obsolete but undead dream of heroes and rescuers pioneering innovations. Lightning bolts of imagination and strength, these so-called leaders are presented as utterly independent of their histories; as though they had fallen from the sky. The haunting seeps into what we call ambition, fueled by our wanting to be important and successful. There are scissors somewhere that slice the ambitious from their comprehension of the mutuality we all inevitably live within. The mutuality is where the imagination is brewing, where the strength is made, where the integrity of the context lies. Can we extract a stand-out entity from that mutuality? How can ‘leaders’ exist without all the relationships that have culminated and fermented to make them? Should we not point to those mutualities as heroic?

As a word, ‘symmathesy’ is part of a family of terms that describe the relational characteristics of the living world. Other terms in this family include symmetry, symbiosis, sympoiesis, and system. Each of these terms includes a prefix indicating ‘together’—sym or syn—followed by a focus on order, growth, pattern, and so on. Symmathesy is a newcomer to this family of concepts and draws attention to mutual learning.


Symmathesize
To generate contextual mutual learning through the process of interaction between multiple variables in a living entity.

Symmetry and Connection
At the level in which we are participants in a larger context, there is a kind of symmetry and grace that we are drawn toward. It is an exquisite harmony unfolding over long narratives that we cannot see. There are moments of union, where we sync up and meet with the indisputable force of a car crash. Connection and recognition are a warm relief found in a flash of communion within ourselves, with babies, animals, those we love, strangers, a piece of music, or the chill of the wind. We know when it happens, with or without words. In that instant we are speaking, and we are spoken to. We can be heard. We can see and be seen. Inextricably, we are part of something both enormous and tiny; a unity that our cells, our bellies, and our aesthetic senses know without need of any authorization. If our conversation is a kaleidoscope, the silence between us is rich dark chocolate and we can eat our words.

Transcontextuality
Terms like interdisciplinary are problematic because they reinforce the idea that there are real disciplines, divisions, ways of splitting things up into categories (which can then talk to one another in an interdisciplinary way).
But the world is not made of disciplines. Life is not divisible into the departments of a university, nor is our understanding of life greatly increased by standard research practices, which tend to pull their ‘subject’ matter out of the larger contexts they exist in, to facilitate focused study. The studied subjects never get put back into their relationships, and the contexts never seem to be describable in the data.
While it’s tempting to think that the context is what is missing in our current research practices, in fact  even context is not enough. Living systems especially require more than one context of study if we’re to get a grasp of their vitality.
The idea of Transcontextuality opens the possibilities of better understanding the interdependency that characterizes living (and arguably many non-living) systems. A transcontextual lens opens up entirely new dimensions of information where the data has otherwise been flattened into a single plane or a single context.

Uncertainty
Uncertainty is a curse and blessing brought on by systems and complexity thinkers. Whether it be medicine, space travel, or other technology, we are too often sure that we have cracked the code of nature and found the answers we need, and that is usually the moment at which we brazenly commit the most destruction. So, uncertainty is healthy. It can change the tone of our approach, make us humble, give a pause, and cool off the arrogance that comes with the sense of having found ‘solutions.’ In this form, uncertainty is good.
But uncertainty has also become a sort of island of intellectual excuses—reasons for deferring deeper study. The problem with making a place for mystery is that it is also an entry point to binary thinking. There soon exist in that epistemology just two categories: that which we know and that which we do not. This is a divide that gains potency and can contaminate our work: both in terms of what we feel we can understand, which assumes a more rigid and possibly arrogant form, and that which we can’t, which turns to fluff and quickly blows away in the wind.
A more modest motivation is neither to completely understand nor to label as mystery, but to simply deepen our understanding. The deepening is not finding the answer, not looking for a final truth, but becoming increasingly familiar with the many complexities that surround all that we study. We will never understand it completely, but we can continue (endlessly) to increase our comprehension of the variables at play.


Vita (plural: vitae): (Pronounced: veet-a and veet-eye)
The downside of defining life in terms of ‘parts and wholes’ is that it blinds us to the developing interactions that take place in life. The ‘parts,’ like members of a family, organs in a body, or species in a jungle, exist inside—and are integral to—larger evolutionary processes.
If symmathesy describes the ‘whole’ (and the process of inter-learning that happens constantly in the ‘whole’), then it’s clear that we also need a better word for the ‘parts.’ Vita and vitae, therefore, mean ‘part’ and ‘parts’. A fuller definition is:

Any aspect of a living entity that, through interfaces of learning, forms a larger living entity or symmathesy. For example, the ‘members’ of a family, organs in the body, or flora and fauna in a forest.

So, instead of ‘parts’ and ‘wholes,’ let us think of vitae whose boundaries in a symmathesy act as interfaces of learning.


Warm Data
A term developed and used by and within the International Bateson Institute to describe data within its many contextual relationships—which we can also think of as relational data.
Seen in this way, it becomes clear that we need to use multiple description to illustrate how interactions in complex systems interlink. These multiple descriptions increase our ability to take into account the integrity of multilayered living systems, to think about multilayered ‘interactions,’ and to respond at a contextual level. Revealing the inter-weavings of complex systems both requires ‘warm data’ and reveals ‘warm data’.​